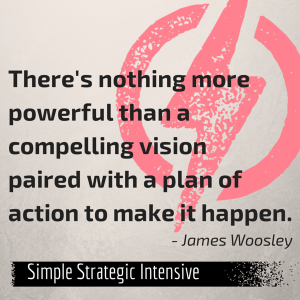 That’s what we say in two simple words when we face an onslaught of increasingly negative and difficult situations. It doesn’t matter how perfect your plans are; when life happens, those plans are derailed and you’re the passenger instead of the conductor.

Hold on, it’s going to be a bumpy ride.

This is a pretty good description of my life for the past few months, and it explains my lack of posts lately. Life happened, and I’ve been derailed. I shared earlier about my grandmother having heart surgery. That was followed by a job loss and capped off with a kid in the hospital for more than three weeks. And there were lots of other things flying around in the debris of these events.

1) I’m a real person, not some magical strategic planning wizard.

I’m very good at what I do and I’ve helped a lot of people. I hope to help many, many more. In fact, I PLAN to! Planning can guide us and help us craft the future we want, but it can’t predict it. There is no crystal ball, and if there ever was, it got broken in the first crash.

I don’t care who you are or how perfect your life is, when you get derailed it’s hard. Things that were important aren’t so critical anymore. Sometimes you get down to pure survival mode. That’s okay. Feeling down and even depressed is normal. But you can’t stay there for long.

Getting derailed is rarely permanent as long as we survive. The intensity of the crash softens and the pieces can be picked up. Sometimes, it even gets put back together better and stronger than before.

4) Having a plan is better than not having one.

Though none of this was planned, the fact that I had a plan and a vision for the future has helped immensely. Knowing this was a temporary derailment gave me hope that the other side of it would be good. Sometimes the prior plan is cast aside so a new one can be formed. Sometimes it’s a lifeline through the darkness. Either way, it defeats hopelessness.

My faith in God wraps all of this together. Without that, I don’t know that it would work for me.

We are well into spring now and the sun is shining. Life isn’t perfect, but it’s being rebuilt.

My grandmother is feeling better than she has in years. So well, that she’s hoping to make an eight-hour drive to see my niece graduate from high school in two weeks. That’s huge since she’s rarely left the immediate area around her home in years.

My kid is doing better as well. I don’t wish to share the details publicly for their sake. Though the recovery isn’t immediate, there’s a strong and solid path ahead now.

As for my job, well…I never talked about it much. It was good while it lasted and the sudden shift from a steady paycheck and a part-time business into no paycheck and a full-time business is rather jarring. But perspective is critical. I choose to see myself as fully self-employed instead of unemployed. And not so surprisingly, business is up and I’m working harder on it than ever before. This is a very exciting turn of events.

I may yet find another good job and take it. Or I may be unemployable if potential employers read this post. That’s okay. If they don’t want what I bring to the table, even if it’s only for a short time, that’s their loss.

Because I add value. I make things happen. And I’m stronger and better now having survived the fires of this and earlier derailments.

I may get knocked down, but I always get back up.

I hope you do to.

Look for more me to be more active online in the coming weeks. I’ve overcome my overwhelm, and want to help you do the same.