If you don’t like reading about me, then you’ll hate this update. But I have some cool stuff to share with those who don’t mind a personal post… :) Also, it’s much longer than I like them to be, but if you read you’ll see the need!

This past week has been incredible. I haven’t been writing here as much as I had hoped this year. I’ve been working on some new ideas and new initiatives in the background, plus taking care of some family things that needed my attention. Then all of a sudden everything seemed to hit this week.

MONDAY — 23 MAY 2011
Monday was pretty normal for me, though I did end my work day early after my wife was in a minor car accident (rear-ended and shook up, but no major damage and no injuries). I ended the day leading a Roadmap Group call and one-on-one session for Free Agent Academy. As my head hit the pillow my mind was racing about Tuesday morning.
TUESDAY — 24 MAY 2011
First thing Tuesday, I was back in Elementary School. Anna, my soon to be 11 year old daughter, was graduating from the 5th grade. The room was packed with students and proud parents, including my wife Heather and I. My son Ian just finished the 1st grade, and he was also attending in his wheelchair (he walked on some hot coals last weekend and was limping a bit…the chair was easier than crutches or carrying him around!).

As soon as the ceremony was over, I rushed back to my office to prepare for the Free Agent Underground show/podcast. I was helping Kevin Miller host the show and interview NASCAR racer Kenny Wallace. In spite of all the technological problems that could have happened with me in Alabama, Kenny in North Carolina and Kevin in Colorado, the show was perfectly produced. But even if we’d had a glitch, I don’t think it would have made a dent in the awesomeness of the interview.

Not only did I get to talk to one of my favorite drivers, but he shared things with us that he’d never shared before (early jobs, business and life advice, the importance of loving your spouse). If you want to hear it, go to the FAU blog or subscribe to the show in iTunes.

[As a side note, I also signed up to sponsor Kenny’s race car at the Charlotte Nationwide race in October. You too can have your name on his car for just $20. Details at http://www.KennyWallace.com.]

WEDNESDAY — 25 MAY 2011
Wednesday night I had a big interview of my own. In April the small town I live (Satsuma, AL) in decided to break away from the county school district, and I applied to become a school board member. I made the cut from 21 applicants to 10 finalists after last week’s interview. So on Wednesday I rushed home (after fixing a flat tire on the highway NASCAR-style 50 miles away) and spent 20+ minutes answering questions from our city council and mayor. I gave it my all, and felt good about the interview.
THURSDAY — 26 MAY 2011
Thursday was Ian’s 7th birthday. School’s out but he hasn’t gotten over waking up early, so he beat me up…or maybe I should say he woke up before me! After working all day, I met him at his Cub Scout meeting where we all celebrated with cake. Exhausted from the week so far, I headed home to get a late dinner and two seconds before starting to cook, the phone rang.

It was the mayor of Satsuma, Bill Stewart, calling to congratulate me on having been selected to be a member of the Satsuma Board of Education! I felt that my chances were good based on my interviews, and I would have been disappointed if I hadn’t been chosen. But I was surprised at how surprised I felt! My exhaustion faded in a wave of adrenaline.

After calling my Heather (she was out with a friend who had just moved into her new Habitat for Humanity home that day), her mom and my parents, I posted the good news on Facebook and Twitter. My iPhone buzzed for the next two hours with congratulatory messages and encouragement. It was amazing!

Then I crashed for the night and woke up renewed to face the day Friday.

FRIDAY — 27 MAY 2011
Heather spent the day running the kids to the doctor (plague again!), preparing for a birthday party for Ian, though it was interrupted by George, our 14 year old Golden Retriever who had some intestinal issues on our carpet and had to see the vet (censored enough?).

The kids were a bit better by Friday night so we went to see the Mobile BayBears with Heather’s mom (who got free tickets for being a teacher!). Ian won a slice of pizza in a dance contest between innings (the song was Cotton Eye Joe, Rednex version), we watched the fireworks after the BayBears lost to the Generals 4-2, and trudged home once again exhausted.

SATURDAY — 28 MAY 2011
This morning we got up and had ourselves a family birthday party in the park, followed by most of us taking much needed naps!

So it’s been quite a week. Lots of good stuff happening, which is the way I like it! Still, I’m hoping for a quiet Sunday so I can vegetate (recuperate) in front of the TV watching Formula One from Monaco, the Indy 500 and the Coke 600 from Charlotte. Lots and lots of laps…and a Memorial Day Monday to recover from my recovery day!

More news to come…June could be very interesting indeed! 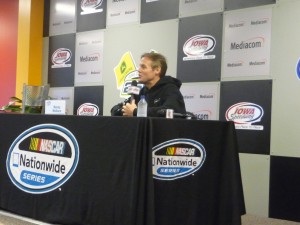 A big thanks to Barak Strickland of Axshun.com for this interview. It was fun, and maybe I made sense! I’d love to know your thoughts.