A few years ago I heard about a little book by John G. Miller called QBQ!: The Question Behind the Question. I had heard Dave Ramsey talk about it and even listened to John on his show, so when I saw the book at a fire sale (literally) I bought two. That means John didn’t actually make any money off of my purchase. (Nor did he last year when I found the audio CD for the book for a dollar!)

Anyway, I didn’t get very far in the book before I was hooked. If you’ve read it, you know the Diet Pepsi story…and probably feel the same (though I’m a Coke Classic guy myself).

QBQ! is a great book on personal accountability and taking responsibility for what happens in our lives, especially in relation with others. John followed that book up with Flipping the Switch, and most recently with Outstanding!: 47 Ways to Make Your Organization Exceptional.

Earlier this year John and I connected on Twitter (he’s @QBQGuy). I already knew he had great books, but he’s also a great guy! He sent me a box full of books for me to review and share. Again, I paid nothing to John! Instead, I repaid his generosity by having them sit on my shelf for a few months…my bad!

I finally got off my rear-end and read Outstanding! in June. I loved it, but I didn’t write about it right away. I had something else in mind…a great idea that was un-executed until last month.

I wanted a visual reminder of the 47 ways he outlined in the book. I needed to see them in front of me all of the time so that hopefully, I could remember the lessons and apply them better. So I made a poster! 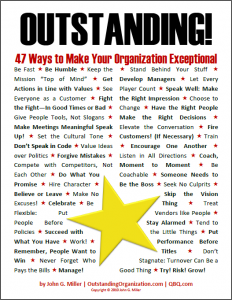 After having them printed and sent to John, he blessed me again by finding a typo (I hate typos!)…but now the final product is ready and he’s allowing me to share it with my audience (which is much smaller than his!).

Download the PDF for the Outstanding! Poster and share it with your friends. And go buy the book if you want to get deeper into each topic. It’s worth the investment and John could use a buck or two from all my freeloading!

But not to worry, I’ll be referring and giving away a lot of his books in the years to come, and if our schedules ever work out, I’ll be buying him lunch when I’m in Colorado next year for a Free Agent Academy event…

PS – To my knowledge Dan Miller (of 48days.com) and John G. Miller (of QBQ.com) are not related. I just dig guys named Miller, and even have nephew named Miller. :)

Okay, I’ll give you a bit more…

This year I’ve spent a lot of time listening to Andy Stanley. Andy is the senior pastor of North Point Community Church (and its satellite campuses) in Atlanta, Georgia. I first discovered Andy through the Catalyst podcast (another favorite), which I found through Dave Ramsey.

Andy’s church has a weekly podcast of his sermons, which are excellent. He has a way of engaging his audience with the truth of the Gospel, yet in a welcoming/non-judgmental way. It’s not that his faith isn’t founded on the same bedrock as many other preachers out there. It’s that he presents grace in his approach. He exemplifies grace better than most (though I’m all for a good fire and brimstone sermon on occasion, too!).

Andy is also a phenomenal leader. The son of well known pastor Dr. Charles Stanley, Andy grew up witnessing excellent church leadership. He applies those lessons and his own experiences to lead North Point into what it has become…one of the most influential churches in America today. To that end, Andy also produces a monthly leadership podcast. This is one podcast I never miss! Subscribe now and get all of the back episodes. It’s golden stuff, no matter what kind of organization you’re leading (church, business, military…).

And while he doesn’t walk on water, I have to also mention he’s an excellent writer. I’ve just finished reading one of his earlier (and one of his personal favorite) books called Choosing to Cheat. (This book’s title, along with C. S. Lewis’s The Great Divorce had to be explained to my wife lest I be in big trouble!)

Choosing to Cheat outlines the struggle between work and family, and how to make the hard choices to be successful at both. You can’t serve two masters, and of course one really is more important than the other. The message here is not new, but the way he frames it is. And then he offers realistic strategies once you’ve realized the choice you have to make. Read this book if you have a family or are married or are even thinking about getting married or having kids! Oh, and if you’re a pastor or have some other divine calling through your work…it should be mandatory.

Okay, I stretched that out long enough. Now go and check out Andy’s stuff!

Last month, while in Colorado for a Free Agent Academy event, I was honored to be the chauffeur for El Presidente, Saddleback Leather Company, Dave Munson. Okay, so I picked him up at the airport. Still, my name is James…a good driver name, right?

Dave Munson is a modern day Earnest Hemingway (the adventurous part, not the mentally unstable part). He’s also an inspiration to anyone wanting to take their passion and turn it into a business.

You’ll have to visit his website to see the best version of his story (and his amazing products), but the short version is that he went from teaching English in Mexico to owning a multi-million dollar company in just a few short years. It started when he wanted a cool leather bag (think Indiana Jones) to carry his books. Soon everyone he met wanted one, so he made more, sold them on eBay and the back of his Land Cruiser and eventually married his hot wife that he met on MySpace. Like I said, he can tell the story better!

What I love about Dave (besides the bags) is his passion. Sure, he loves making the coolest bags on the planet, but he’s also a committed Christian and family man. He’s a hilarious marketing genius, too (the SBL tag-line is “They’ll Fight Over It When You’re Dead”)! Just read his website!

Dave lives a life all men would love to live. The worlds most interesting man isn’t a pitchman in beer commercials…but he might be the owner of a leather bag company.

Dave recently spent more than 50 days touring Europe and Africa. Yes, he unplugged from his business that long and everything went just fine. He has an incredible team behind him, and his adventures automatically qualify as a business deduction! But it wasn’t all business. Dave was also serving children in Rwanda (everyone’s favorite vacation destination, right?) and is a big supporter of Africa New Life Ministries.

And while in Africa, he made a little video mash-up between his leather backpack and the spear of a Masai Warrior (and the source of the scar in the photo above:

I’ve known adventurous and outgoing people like Dave before. I liked them and been friends with them, but they were missing something.

I’ve also known amazing men of Godly character, and while they sometimes had adventure they didn’t always have a cool factor.

Dave Munson pulls off “adventurous cool Christian” better than anyone I’ve ever met. I’m honored to be a fan and a friend. I’m proud to have made some minor contributions coaching with SBL. And I’m stoked about my cool leather bags!

Now YOU need to go buy a cool leather bag for Christmas! You’ll want to have it safe and secure so the Mythbusters can’t blow it up a la Valkyrie!

(Yes, there are affiliate links for SBL throughout this article and my site…because I believe in them!)

Photo of me with Dave courtesy of my good friend Alan Jackson.

Justin Lukasavige (owner of Lukas Coaching) is a friend of mine and fellow professor from Free Agent Academy. He’s also a pretty neat guy.

He left a job being an airline captain to become a financial coach. And now he’s helping other people learn how to be successful in coaching, business and social media (he’s everywhere!).

Justin wrote an excellent book, Become a Coach (I was honored to read an early print version and use my nerd talents to help eliminate some typos!).

But even better than the book is his online radio show, CoachRadio.tv. In this online production/podcast, he goes through all the ups and downs of running his business and teaches anyone willing to listen and learn what they can do to make their business grow.

He also frequently shares the microphone with other coaches and business owners in his Your Story series. Some are very successful and some are just starting out. But there’s inspiration in all of the stories. It’s fun to listen to and I always gain a few golden nuggets I can use to help make my business better.

Thanks Justin for being so open and sharing so much helpful info!