Tonight is dark and stormy, with nearly a full moon. I stepped outside to check the mailbox, and found a single envelope inside. It was from the government.

Do I dare open it?

Why sure. It’s only my annual Social Security Statement. At least it’s not from the IRS (really scary stuff from that brood of demons).

So how is something from the Social Security Administration scary? Keep reading…but you may want to sit down.

I’m 35 years old. Looking at the statement, it summarizes my income since I started earning money and filing a tax return (a whopping $713 dollars in 1991!). I’ve been blessed since those intermittent high school summer jobs to earn a great living doing work I enjoy, so the numbers for 2008 (the last year on the statement) are much, much higher. A real pat yourself on the back and thank God moment.

Below that section is the scary part. Scary mad that is. The statement summarizes the estimated taxes paid into Social Security over my working career. My portion is more than $50,000! My employer’s portion is the same (and I’ve always considered that a portion of my income I just don’t get to handle, since it would be mine if the government didn’t force it from my employers hands). All told, more than $100,000 dollars paid into Social Security so far.

It sure would be nice to have that money in my Roth IRA instead of being pilfered by the government. You see, if I could have that money today, and invest it at 12%, in just 20 years, it would be worth more than $1 Million Dollars! I’d be a 55 year old millionaire, and never have to invest another penny beyond today!

See for yourself with the Investment Calculator from Dave Ramsey’s site.

But there’s a problem. Even if the old SSA could give me a return like that, at 55 years old, I wouldn’t be eligible to get my money. In fact, if I die before I’m eligible to start collecting Social Security, my family doesn’t get to keep the money. The government does! If it were in my Roth IRA or 401K–or even my sock drawer–my family gets the money. Did you digest that? Read it again!

Considering the horrible state of affairs with the old Social Security funds, I likely won’t be eligible to collect until I’m about 75 years old. Again, if I could have the money in lump sum today and invest it myself, earning 12%, I’d have more than $11 MILLION DOLLARS!!! 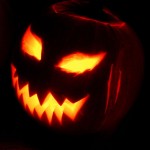 I cannot trust that Social Security will even exist when I’m able to retire. And unless you’re already collecting, you probably can’t trust on it either. You have to make your own retirement happen.

Get out of debt, build an emergency fund of 3-6 month of expenses, and then invest 15% for retirement.

Only you can make yourself a millionaire in your retirement years. But you have to start soon. Time and compounding interest are your best friend or worse enemy, depending on when you start.

How much do I wish I could opt out of Social Security? I’d be willing to forfeit the $100,000 I’ve already paid in, if I simply didn’t have to pay another dime into the program. Then I could invest my 6.2%, plus my employer’s 6.2%…and build my own wealth.

Remember this next Halloween. It’ll only be a few days before Election Day!

Who is to blame for your failures? Are they a result of the decisions you’ve made? External forces beyond your control? Or could it be a future so afraid of your success destroying the universe that it comes back to stop you from succeeding?

Scientists are blaming their failures on the Large Hadron Collider project on the “future” according to an article in the New York Times by Dennis Overbye:

“More than a year after an explosion of sparks, soot and frigid helium shut it down, the world’s biggest and most expensive physics experiment, known as the Large Hadron Collider, is poised to start up again. In December, if all goes well, protons will start smashing together in an underground racetrack outside Geneva in a search for forces and particles that reigned during the first trillionth of a second of the Big Bang.

Then it will be time to test one of the most bizarre and revolutionary theories in science. I’m not talking about extra dimensions of space-time, dark matter or even black holes that eat the Earth. No, I’m talking about the notion that the troubled collider is being sabotaged by its own future. A pair of otherwise distinguished physicists have suggested that the hypothesized Higgs boson, which physicists hope to produce with the collider, might be so abhorrent to nature that its creation would ripple backward through time and stop the collider before it could make one, like a time traveler who goes back in time to kill his grandfather.”

Impossible science courtesy of Hollywood’s Marty McFly (Back to the Future) and John Connor (Terminator)!

I’m a bit of a nerd and think it’s a pretty interesting experiment (though the notion of a “God particle” is ridiculous). And while these scientists have bigger brains for than I do, I have to wonder if they’re setting a dangerous precedent.

If you’ve lost your job and are struggling to find one in our current economic client, is that a function of the future? Has time somehow worked its way backwards to sabotage your career?

Imagine you’re in a job interview and asked why you were let go from your last job. Your answer: “The future sabotaged that job just so you could hire me for this one.” I don’t recommend that approach!

Can your future determine your present? Normally we’d say no. But I’m wondering if perhaps it can. Do you have a vision of the future you would like to create? If you don’t you can only get there by accident.

So go build yourself a time machine. Get to the future you desire by working hard today–with goals in hand–to get to where you want to be tomorrow.

Particle physics aside, that’s the only way to get there!

It’s my job, my mission to help people with their careers and finances. I enjoy it and I’m good at it. But that doesn’t mean I can help you.

The simple fact is that some people are beyond help.

It’s not that their situations are beyond repair. I’ve seen some pretty bad situations while coaching, but there are paths forward for all of them. The problem is that some people simply want a magic pill to solve all of their problems. They have blinded themselves to the reality of their situations and don’t want help…or won’t admit they need it.

So, if you simply need a friend to pat you on the back and let you wallow in the pit you’re in, I’m not the coach for you. But if you’re sick of where you’re at…if you hate your job or aren’t reaching your financial goals…let’s talk. If you’re ready to make changes and work hard, let me know.

I can help you.

If you’ve ever been to an air show, you’ve probably seen a pilot put an old airplane into what appears to be an out of control tumble towards the ground, only to save the plane and pull out of the spin at the last moment. It’s really a cool stunt, and it’s really dangerous.

But sometimes they don’t make it.

These death spirals can pop up in other areas as well, and no one but a stunt pilot would enter into them on purpose. In business, we can be doing good work, but market changes or internal inefficiencies multiply, and before we know it we’re spinning out of control. Most businesses will just keep doing what they’re doing, hoping to do it better enough that they survive. Most don’t.

It happens in our relationships as well. We wake up one day and poof…who is that person we’re married to or in business with? Remind me again why we are friends? How did I end up hating my job? All too often we only notice that we’re in a death spiral once it’s too late.

What do we do about the dreaded death spiral?

1 – Learn to Recognize It
How do we know when we’re in a death spiral? It’s hard, but there are signs. Look for complacency or unjustified optimism. Look for silent arguments or issues swept under the table. If there’s an elephant in the room stinking up the place (trust me, both real and metaphorical elephants stink), and no one is saying anything about it, you are already there.

2 – Recovering from the Death Spiral
There is only one thing that can save you (beyond divine intervention or accident, and while I’d hope for the former, I wouldn’t expect the either). That one thing will depend on your exact situation and environment and can take many forms. The one thing is drastic and immediate change.

You have to stay calm and assess the situation. But you have to act, and act quickly. The longer you spiral out of control, the more difficult it will be to recover.

The status quo has got you where you are. Sticking to the same route will only get you killed (only figuratively, I hope).

Small changes may only mask the problem or give the illusion of recovery. You need to zig when everyone else zags.

John G. Miller tells a story in his book QBQ: The Question Behind the Question, about a father flying with his daughter. When the engine of their small plane cuts out, he smoothly tells her that something is wrong and he has to fly the plane differently. Had he continued flying as if he had an engine when he didn’t, he wouldn’t have been able to tell the story.

Drastic and immediate change in response to the circumstances, even if all you have is a Hail Mary pass.

3 – No Guarantees
By the time you realize you’re in a death spiral, it may be too late. I’m not saying that you shouldn’t try, but you should be realistic. Even if you do all the right things, you may not recover.

If I fall out of an airplane without a parachute, I’m going to do two things: pray and flap my arms. Flapping my arms is not a sign of lack of faith…it’s meeting God halfway. It may or may not help, but I’m going down fighting and I’ll have a great story to tell either in the hospital or in Heaven.

Can the Death Spiral Be Avoided?
Probably not always. But if you keep your eyes on where you are going and where you are, you’ll see when you get off course. Constant minor adjustments will keep you on the path. Fail to pay attention, and you veer off course. And pay full attention, and external forces can still knock you off course. In your life, career, business or marriage…be prepared and be alert.

What do you think?